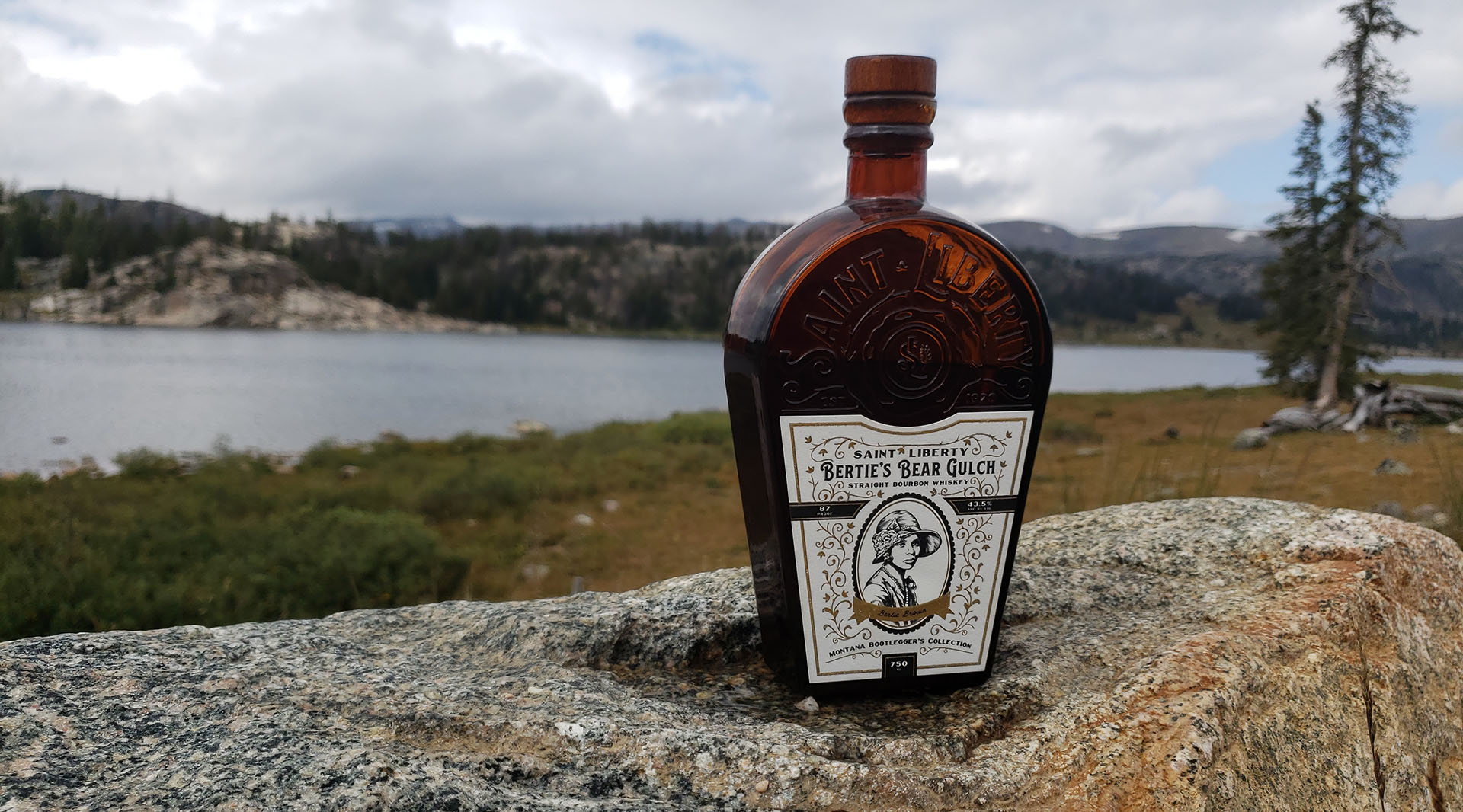 Saint Liberty celebrates America’s Women Pioneers in whiskey during Prohibition and those freedoms both given and taken away in 1920.

We source the finest craft whiskies from distilleries around the world and perfect them using same pure water sources in the states of each of our honored women bootleggers.. 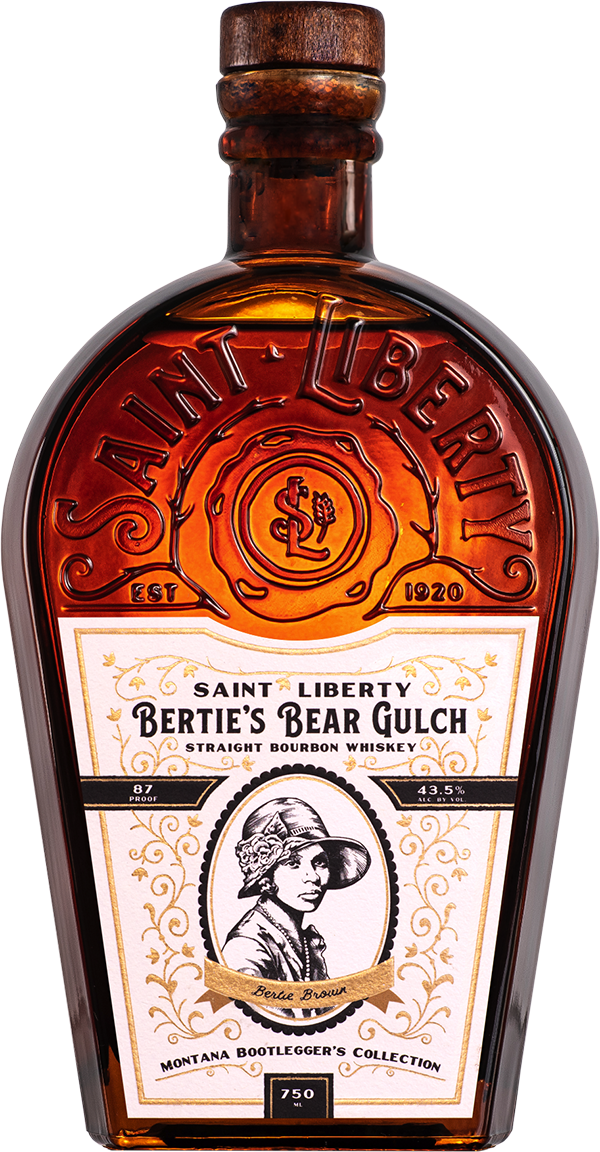 Bertie Brown was one of a few young African American women to homestead alone in Montana in the 1920’s. Bertie was famous for her warm hospitality and for brewing what locals called “The Best Moonshine in the Country.” Bertie’s Bear Gulch Bourbon is a 4-year aged Texas Bourbon, perfected in Montana. Tasting notes – slightly smoky beyond its years, dried apricot, caramelized vanilla, hint of brown sugar with a little spice from the rye in the finish. Learn More. 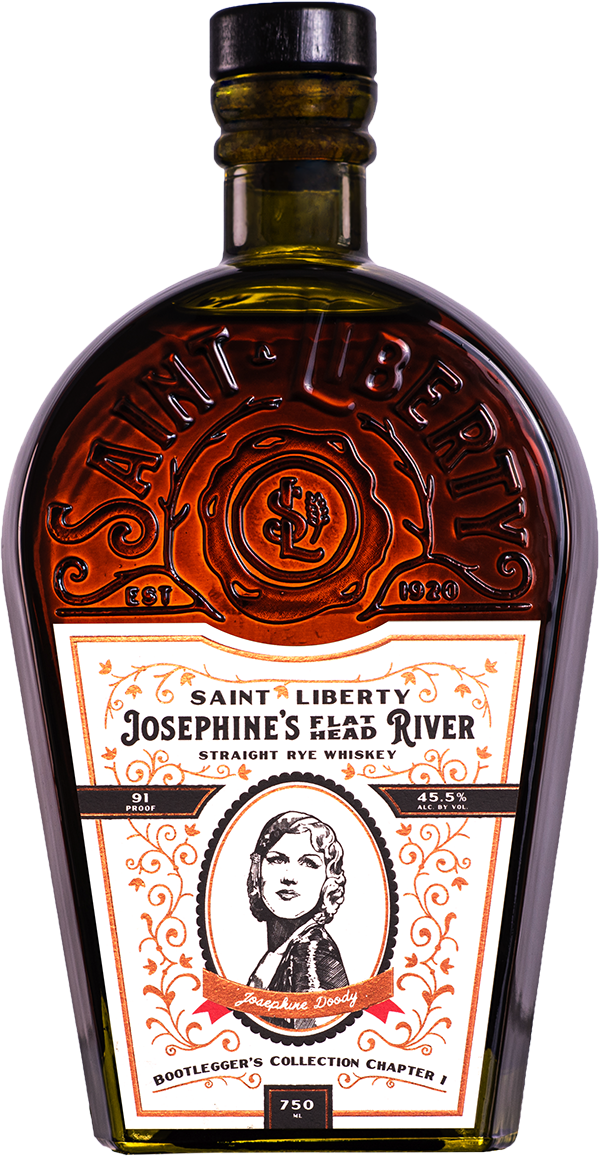 Once a dance hall worker, then a distiller. Josephine Doody was known as the Bootleg Lady of Glacier Park. She was forced to go on the lam from Federal agents after killing a man in a dance hall. Josephine’s Flathead River Rye is a 5-year aged Tennessee Rye Whiskey, perfected in Montana. Tasting notes – very approachable, sweet notes of vanilla, lightly charred wood and grilled peaches. Finish of creamy rye, marshmallow and vanilla. Learn More. 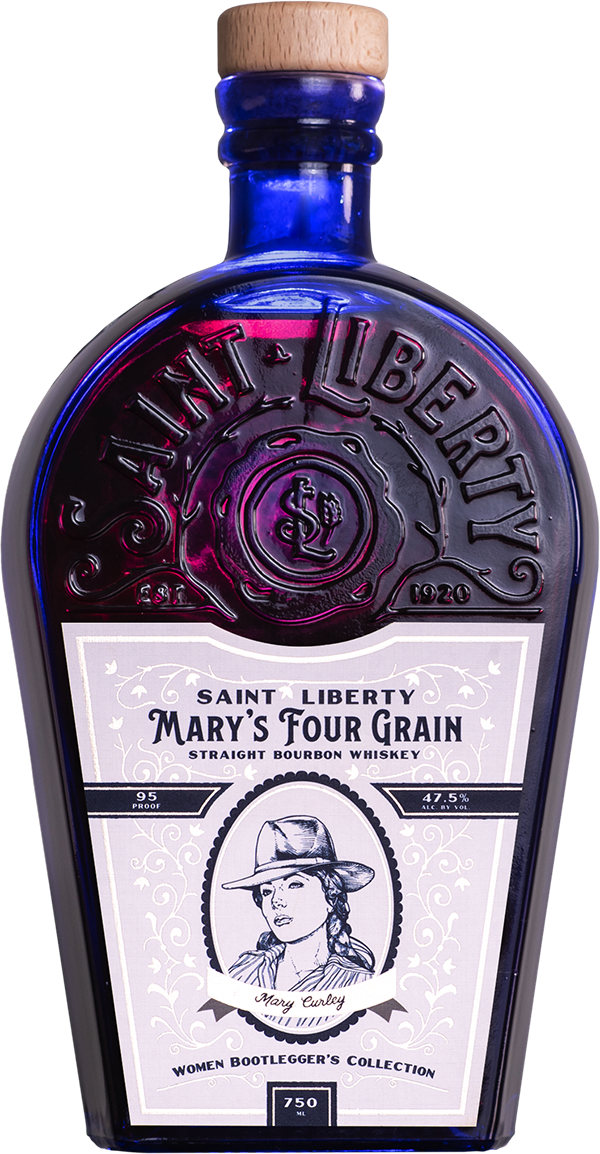 Mary Curley was the infamous bootlegger to catch in her home of Marble Colorado. With a fiery spirit that matched her red hair, Curley never did pay a single penny of the fines tied to her name. Mary’s Four-Grain Bourbon is a 4-year aged Texas four-grain, perfected in Marble, CO using water from the Crystal River. Tasting notes – approachable, sweet notes with vanilla, charred wood and grilled peaches. Pallet is creamy rye with a finish with notes of vanilla and marshmallow. Expected release, June 2020. Learn More. 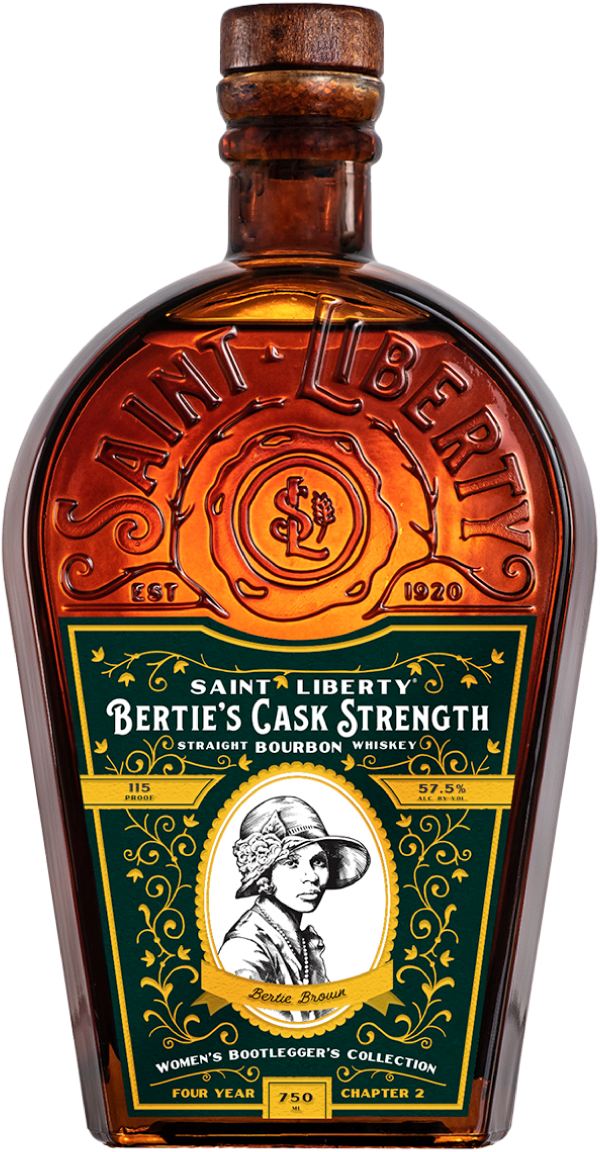 Bertie Brown was one of a few young African American women to homestead alone in Montana in the 1920’s. Bertie was famous for her warm hospitality and for brewing what locals called “The Best Moonshine in the Country.” Bertie’s Cask Strength Bourbon is a 4- year aged Texas Bourbon. Tasting notes – inviting notes of morello cherries, caramelized vanilla, toasted walnuts, and almonds with a hint of allspice and brown sugar. Learn More

What People Are Saying

Saint Liberty celebrates America’s founding ideas of Independence, Justice, and most of all, Liberty.

Liberty is “An expression of the American mind.”   The Founders saw Liberty as the opposite of tyranny. Freedom from dependence on another’s will. The ability to choose one’s own way without interference.

Liberty has become synonymous with Freedom and the American ideals of equality and democracy. It also became a symbol of the suffragettes, these women excluded from the political system as not having the right to vote, until 1920.  Saint Liberty symbolizes the hope for a better world and celebrates our early women pioneers in the spirits industry.

Saint Liberty was the hope and the light for a better future for so many immigrants, especially for the large portion of immigrants that found their way to the Montana Territory and the State of Montana.  It was Saint Liberty who looked over the souls from abroad and it was also Saint Liberty who guided our Celebrated Heroines of Prohibition like Bertie Brown, Josephine Doody, Mary Curley, Mary Ann Moriarity and Nora Gallagher.  With the abundance of wheat, barley and rye and the purest of water, there was no shortage of good whiskey and shine.

Saint Liberty gave these bootleggers the economic freedom to pursue their happiness and provide for their families.  Saint Liberty is the light that guides us all.

The 1920s was a decade characterized by freedoms granted, and freedoms taken away. While women secured the right to vote after nearly a century of protest, the 18th Amendment introduced Prohibition and a ban on all alcohol sales.

Under this cloud of repression, some industrious women took up the fight against Prohibition. Inspired by recent political gains, they used their passion for resistance to join the whiskey bootlegging trade. Operating kitchen stills and “home speaks,” these heroic women ensured that “hooch” never stopped flowing.

Laurel Bush, in Dallas, TX, excited to have a Bert

Now look at this… Root Beer Old Fashioned on ta

This is how we happily power threw some last minut

What does the Bourbon Lover in your life want for

Alex shows us how to Gold Rush for a masquerade.

This is how we Gold Rush, with Friends. #partycoc 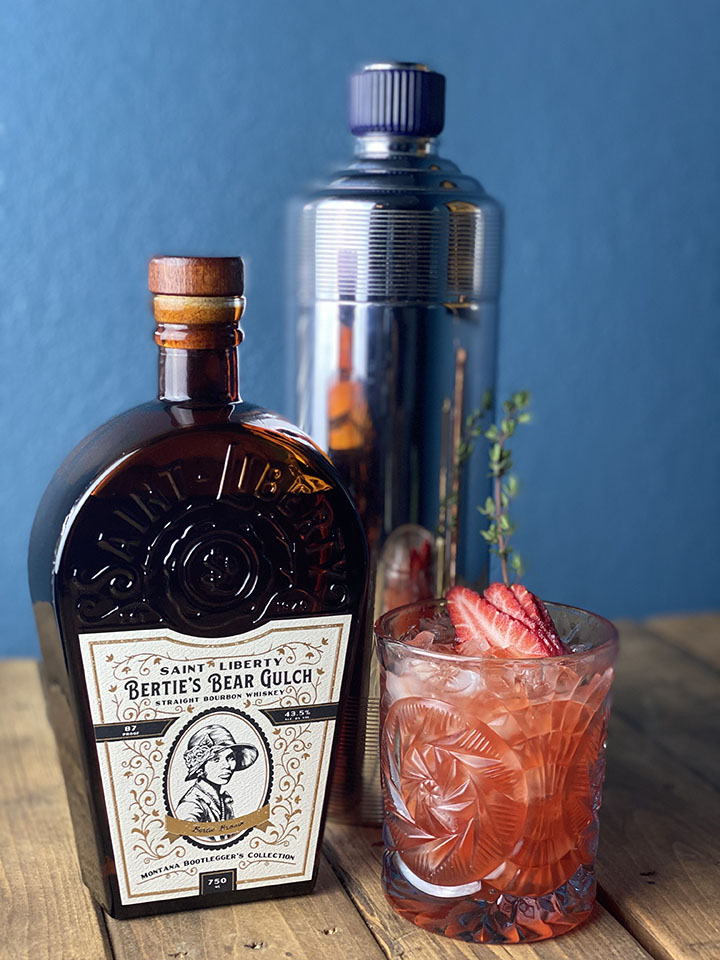 Our foundation is in celebrating women who were all about hospitality and a good drink.

Saint Liberty Whiskey’s unique, approachable yet complex profiles and flavors lead to some exceptional, creative cocktails to be savored and enjoyed anytime.

Browse and explore some of our favorite recipes you can make at home.

At Saint Liberty, our Mission is to create opportunity through honoring pioneering women. 5% of our gross profits go to women’s empowerment, education and entrepreneurial groups and efforts to help encourage the next generation of pioneering women.

Our “Guiding Saints” Advisory Board consists of women of all backgrounds and experiences, understanding that our goal is to build on shared experience to find the best ways to lift all women up.

For 2020, one of the groups we’re supporting is Soledad O’Brien’s PowHERful Foundation that serves to get young women to, and through, college. 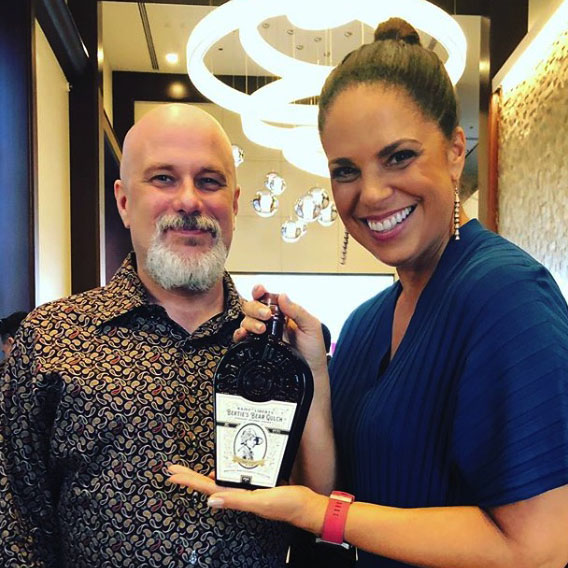