Saint Liberty celebrates America’s founding ideas of Independence, Justice, and most of all, Liberty.

Liberty is “An expression of the American mind.” The Founders saw Liberty as the opposite of tyranny. Freedom from dependence on another’s will. The ability to choose one’s own way without interference.

Liberty has become synonymous with Freedom and the American ideals of equality and democracy. It also became a symbol of the suffragettes, these women excluded from the political system as not having the right to vote, until 1920. Saint Liberty symbolizes the hope for a better world and celebrates our early female pioneers in the industry.

Saint Liberty was the hope and the light for a better future, especially for the large portion of immigrants and people of color. It was Saint Liberty who looked over the souls from abroad and it was also Saint Liberty who guided our heroines of Prohibition like Bertie Brown, Josephine Doody and Mary Curley who all produced some of the best hooch in their regions. With the abundance of wheat, barley and rye and the purest of water, there was no shortage of good whiskey and moonshine. Saint Liberty gave these bootleggers the economic freedom to pursue their happiness and provide for their families. Saint Liberty is the light that guides us all.

The 1920s was a decade characterized by freedoms granted, and freedoms taken away. While women secured the right to vote after nearly a century of protest, the 18th Amendment introduced Prohibition and a ban on all alcohol sales.

Under this cloud of repression, some industrious women took up the fight against Prohibition. Inspired by recent political gains, they used their passion for resistance to join the whiskey bootlegging trade. Operating kitchen stills and “home speaks,” these heroic women ensured that “hooch” never stopped flowing through the hills of Montana.

While trying to come up with a unique bottle that would stand out amongst all other brands our Founder and Chief Historian, Mark SoRelle, searched all over the globe for inspiration. As luck would have it he found an old antique pint bottle that jumped out at him and he purchased it for a whopping sum of $35 dollars. He knew from the moment that he held it in hands that this was the design to honor Saint Liberty. Mark was confident that the inspiration from this bottle was exactly what we need to showcase and tell the story of Saint Liberty. We knew the product inside would have to match the quality of our bottle and we believe we’ve accomplished that with extremely high quality craft whiskies. 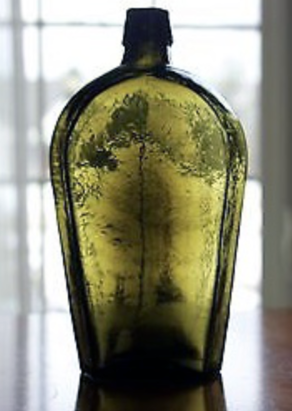